The Lamborghinis that Shaped the Brand 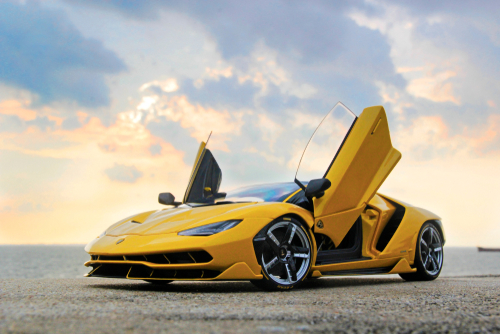 When Ferruccio Lamborghini founded his iconic supercar brand in 1963, he did so in a way opposite of most other supercar manufacturers. Instead of turning racing cars into touring cars, as did Bentley and Ferrari, Lamborghini started by building touring cars—just really fast ones with race-like chassis. While Ferrari allowed drivers to feel the pound of the pavement, Lamborghini sought to give them a different experience. Lamborghinis were some of the first supercars to feature electric windows, automatic transmissions, and air conditioning.

Lamborghini cars also turned heads with bold and distinctive body styles. Some of these styles have shaped the brand into what it is today. Here are the Lamborghini models that continue to define this legendary Italian brand.

The few models Lamborghini produced prior to the Countach could be considered little more than puttering around in the garage. Designed by the brilliant Marcello Gandini, the Countach made grown men bite their knuckles and cry—and still does. Gorgeously shaped and equipped with a 4.8-liter V12 engine, the Countach can reach 60 mph in less than 6 seconds.

The car enjoyed a four-year production run and several restylings thereafter. Lamborghini even made a 25th anniversary edition of the car in 1988 to celebrate the company’s birthday. Today, car enthusiasts still seek to get their hands on an original Countach, and elements of its styling can be found in nearly all Lamborghinis made since.

The successor to the Countach, the Diablo continued to refine the Lamborghini brand. The car’s shape arched slightly upward through the center, the side air vents moved from centered behind the doors to underneath them, and lines that were eye-numbingly straight on the Countach curved strategically on the Diablo to improve aerodynamics.

Whether it is prettier is a matter of taste, but looks were not the only change. The Diablo also came with a 5.7-litre V12 engine that reached 60 mph in 4.5 seconds and topped out at 202 mph. In 1993, Lamborghini released the Diablo with an all-wheel drive version that became the standard for its top performing cars. It also used a viscous coupling to transmit the torque between the axles. The Diablo was so popular, Lamborghini ran production for 11 years.

This last one was a tough call. Hardcore enthusiasts can easily identify traces of the cheerful-looking Gallardo and the avant garde Reventon lurking within the Huracán’s styling. One could also argue that the Aventador, Lamborghini’s project “to embody the purest DNA of Lamborghini” and “a legend in the making”, would qualify as the better option.

But the true brand-defining Lamborghinis have always exuded a sense of astonishing beauty and power, and that’s exactly what the Huracán does. Whereas the Avendator smacks slightly of trying too hard, the Huracán doesn’t waste a single line or angle. It has the upward center arch of the Diablo, the low sloping profile of the Countach, and the attractive front vents of the Gallardo. These elements combine to form a machine that looks like it would as soon eat you as seat you. It looks as if it might levitate. Only time will tell how deeply the Huracán will impact the Lamborghini brand.

Need someone to service your Lamborghini? Call the experts at Ottos European today!